Dig this… a portion of this post is sponsored, but opinions are my own and 110% “pawthentic”!

Today officially marks the third anniversary of Pet Anxiety Awareness Week, an event that’s close to my heart. I launched this passion project of mine back in 2017 as a way to provide pet parents with the resources they need to help their pets. I wanted to spare as many families as possible from the heartache that I had experienced as I struggled to find solutions to my own dogs’ severe fear, anxiety, and stress (FAS).

Well, I’m happy to say that PAAW has been more successful than I ever dreamed it could be.  In just two years we’ve been able to accomplish some great things. As a result of PAAW we’ve: The Fourth of July and Noise Aversion

While this is our PAAW kick-off week, this year I’ve extended this awareness event to last the entire month of June. This way, we can help as many pets as possible leading up to July 4th, which is a very stressful holiday for many dogs and cats. 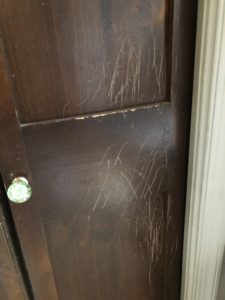 Chilly’s claw marks as he tried to get into our closet.

There was a time when I used to look forward to the fireworks and festivities around the 4th of July. But when Chilly came into our lives that changed. Our family dreaded the holiday because of the effect it had on him.

The sound of fireworks would send him into a state of panic. He would leave claw marks on my closet door as he tried desperately to get in and hide. Then he would pull my dresses right off of the hangers to make himself a pile of clothes to lay in. Our veterinarian diagnosed Chilly with noise aversion, a medical condition that causes him to experience fear — even terror, during noise events, such as thunder or fireworks. 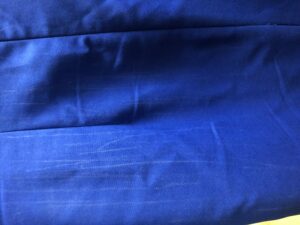 Chilly would claw at my dresses to create a pile to lay on when he had anxiety due to noise.

During the first eight years of his life, we tried various treatments, some more effective than others. But then last year we discovered a solution that changed everything — SILEO® (dexmedetomidine oromucosal gel).

More about this game changer in a moment.

Some studies show that as many as one third1 of all dogs in the US suffer from one or more signs of noise aversion. Sadly, many dogs never receive help for this diagnosable condition.

I spoke with Sharon L. Campbell, DVM, MS, DACVIM about why noise aversion is an underdiagnosed condition. According to Dr. Campbell, one reason is that many pet parents view it as a behavior problem rather than a medical condition. They feel that the behaviors caused by noise aversion are just normal dog behavior or part of their dog’s personality.

Since these pet parents aren’t always aware that the signs they are seeing are an indication of fear, or that they could be treated medically, they may not even realize they should bring the topic up with their veterinarian. Even if their vet asks them directly if their dog is afraid of noises, they might answer that he isn’t since they may not even associate the behaviors as signs of fear.

However, a dog that suffers from noise aversion may experience the equivalent of what a human would during a panic attack. Therefore, addressing your dog’s noise aversion signs is critical to their welfare and quality of life.

The key to a successful conversation with a veterinarian is to become educated regarding the signs of noise aversion so that pet parents can speak to their veterinarian about finding an appropriate solution for their pet.

Know the Signs of Noise Aversion 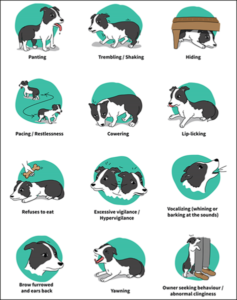 While fireworks are a common trigger for noise aversion around this time of year, there are many noises that dogs can make a dog fearful, including thunder, construction, traffic, and even loud celebrations or gatherings with family and friends that don’t include fireworks.

Common signs of noise aversion include:

If left untreated, noise aversion can get worse over time. So, if you notice any of these signs in your dog, it’s really important to talk to your veterinarian. You can use this checklist to create a report to help you share important information with your veterinarian.

A Game Changer for Dogs With Noise Aversion

Early on, we involved our veterinarian in our efforts to deal with Chilly’s noise aversion, and we really valued the help and advice that he gave us. Prior to 2018, the only medication our vet had ever prescribed for Chilly was trazodone. We didn’t like how it sedated him, so we would only use it when he had severe panic attacks related to noise (usually fireworks or thunder). We also didn’t like that it made him groggy for hours after the noise had stopped.

When I first heard about SILEO, I immediately hoped that it could work for Chilly. I learned that it is an FDA-approved medication that specifically treats noise aversion in dogs. I did some research online, and what really appealed to me is that it’s very effective in calming dogs, but it does so without sedating them, unlike many other treatments. Armed with information about Chilly’s symptoms, I spoke to our vet, who felt that SILEO would be a great solution for Chilly’s fears related to noise.

We tried it and it worked beautifully. Chilly spent last July 4th awake and calm! Since then we use SILEO every time we expect thunder or fireworks.

How to Administer SILEO

Here’s how it works. SILEO is a gel that comes preloaded in a multi-dose syringe. Your veterinarian determines the dosage. All you have to do is set the dosing ring on the syringe to the correct spot and lock it in place. Then place the syringe between your dog’s cheek and gums and it will be absorbed by the mucous membranes in his mouth, so you don’t have to worry that he’ll spit it out. And you don’t have to go through the trouble of disguising it as a treat to trick him into swallowing it.

If you’d like to see how it’s done, this short video shows exactly how to administer SILEO to your dog. When to Administer SILEO

You’ll want to give the first dose of SILEO about 30 to 60 minutes before the noise begins. So in the case of fireworks, which often begin at dark, you’ll want to administer it up to an hour before the sun goes down. Last year on the 4th of July, we gave Chilly a dose at dusk and he was cool and calm when the noise from the fireworks began. For less predictable noise events, you can also administer SILEO as soon as you hear the noise or when your dog begins to exhibit signs of fear or anxiety related to noise.

SILEO takes full effect 30-60 minutes after it’s given, and it lasts 2-3 hours. Fortunately, you can redose your dog in 2-3 hours, or up to five times per noise event, should the noise event last longer than expected and your dog begins to show signs again.

Prepare Now for the 4th of July

Remember, SILEO must be prescribed by your veterinarian, so here are some steps to put you on the path to getting your dog help before the holiday. Depending on when you start this process, getting a diagnosis and prescription can take anywhere from a few days to a few weeks.

Thanks to SILEO, the 4th of July and other noise events aren’t nearly as stressful for Chilly or for us!