MENUMENU
You are here: Home / Cats / When Should I Spay or Neuter My Cat?
Tweet2
Pin47
Share28
Email
77 Shares

Who doesn’t love a kitten? Playful and sweet, snuggly and full of purrs, they melt hearts with every swish of the tail and uncertain, wobbly step. But these adorable little fur balls don’t stay little for long, and the sad truth is, letting kitty “have just one litter,” can have a long-lasting, damaging impact on so many innocent little lives.

That’s why the last Tuesday in February has been set aside as World Spay Day in an effort to raise awareness of the problem of animal overpopulation and the importance of having pets spayed or neutered. This is an important day for all animal lovers, but here are a few things for cat parents to keep in mind:

Why Spay or Neuter Your Cat

Female cats who have been spayed have a lower risk of developing pyometra (a uterine infection that can be fatal). They also are less likely to have mammary (breast) or uterine cancer and cancer that affects other parts of the reproductive system. Neutered male cats will not develop testicular cancer, and they have a lower risk for prostate cancer.

Having your cat spayed or neutered will not change his or her personality, but it will cut down on the likelihood of several undesirable behaviors.

More Money in Your Wallet

Some cat parents avoid spaying or neutering because of the cost. However, this is only a short-term savings. Properly caring for litter after litter of kittens will be far more expensive than a one-time vet bill.

Even if you are the parent of a male cat, or are able to successfully keep your female away from males when she is in heat, the costs of dealing with long-term health risks can also add up. A male who gets an abscess as a result of fighting will need medical attention. And treatment for cancer can cost as much as ten times the amount of a routine spaying or neutering surgery.

If you are concerned about being able to pay for the procedure for your cat, check out the ASPCA’s database of low-cost spay/neuter providers. It’s the best thing you can do for your cat!

When is the Best Time to do it?

It’s safe to spay or neuter a kitten who has reached 8 weeks old. Many animal shelters perform the surgeries at this age in order to avoid adopting out unaltered cats.

If you adopt a cat who is not already spayed or neutered, plan to have it done before he or she is 5 months old. This will be soon enough to prevent male cats from starting to spray and female cats from becoming pregnant.

Spaying or neutering your cat is paws down one of the best things you can do for their health and well-being. And it comes with the added peace of mind that you’ll be doing your part to help solve the problems of overpopulation and unwanted kittens. 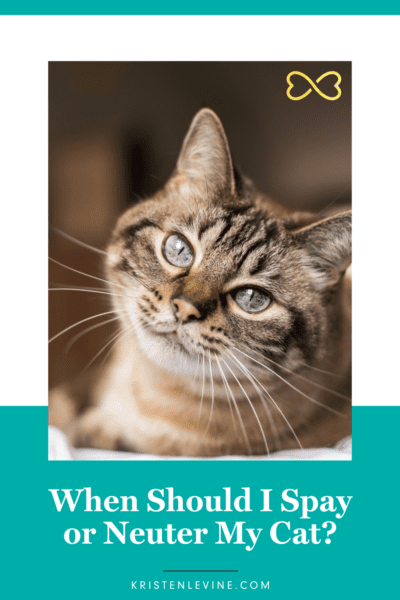 Bissell BarkBath Review – Is it Worth the Money?
Next Post: All You Need to Know About House Training a Puppy